I have recently moved back to Hong Kong, so expect some nice posts on the wealth of great Asian food that you can get in this city soon. I’ve already started exploring some of the new restaurants that have sprung up while I was back in the UK. But because I’ve also just moved into a new place, with a nice shiny new kitchen, I thought I’d see how easy it’d be to reproduce a Nigel Slater classic that I’ve cooked many times before in this foreign location.

Take two chicken thighs (Wellcome in Hong Kong has these for HK$20). Rub some olive oil into their skin and then season them with a fair bit of salt and pepper. Heat up a pool of oil in a large pan and drop in a big chunk of butter. Wait until the butter and oil start to bubble, then throw in the chicken – let it brown on both sides and then turn down the head. Take a few meaty cloves of garlic, press them down with a knife side until they split and throw them into the pot with the skin still on. Leave the chicken so it is just hissing slightly in the pan. Cook like this for a good forty minutes or so. 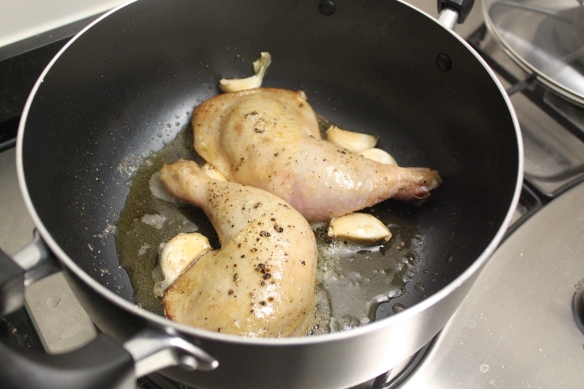 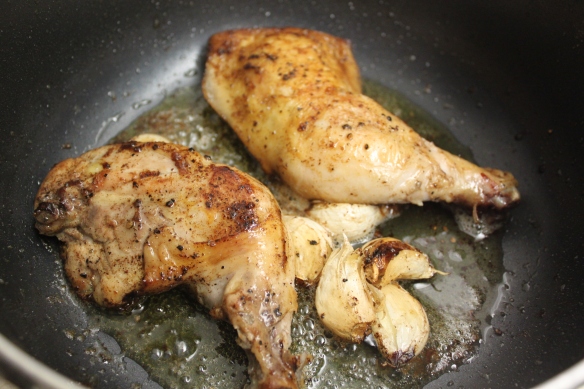 Then take the chicken and the garlic out of the pan and keep it warm. Pour some wine into the pan (the recipe really says you should use white wine, but I had some red left over from a past meal and it seemed to work well too). The wine will de-glaze the pan, taking up all the fat that is stuck to the bottom and absorbing all the bits left over from the chicken. Simmer it for a while to boil off the alcohol and reduce this gravy. Throw in some herbs – time if you can get it, or rosemary in my case.

I’d say it’s best to serve this with mash of some kind to soak up this nice gravy. I made standard mashed potato that has a nice earthy texture to compliment the crisp and slight oiliness of the chicken flesh. I think that sweet potato mash would also work well. Anyway, all in all, a nice simple dish, and easy to produce even in Hong Kong with limited resources and ingredients.

Yesterday evening I tried cooking a Hugh Fearnley-Whittingstall recipe for Pork In Milk which was published in the Guardian Weekend Magazine a couple of weeks ago.

The recipe is loosely based on the Italian dish Arrosto Di Maiale Al Latte. There are good articles about how to cook that here and here. From what I can tell, the main thing Whittingstall’s recipe adds is the use of lemon zest and sage in the milk sauce.

Basically the recipe involves first making a milk sauce loaded with herbs, garlic flavoured oil and lemon. The flesh of the pork then absorbs these different flavours as it slowly simmers in this sauce. It’s a simple method, but it works wonderfully.

The pork slowly cooked in the milk comes out tasting wonderfully tender and smooth. It has nice subtle flavours, the earthiness of the different herbs sitting well alongside the slight zestiness that lingers from the lemon.  A thin slice of this buttery meat, with a bit of the creamy tasting curds of the sauce, tastes fantastic.

More and more, I feel that slow cooking of meat is the way forward, producing the softest most flavourful results. But slow cooking in milk adds something extra again, letting the meat not just stay soft but absorb a kind of creamy smoothness. I plan to try this variant next. 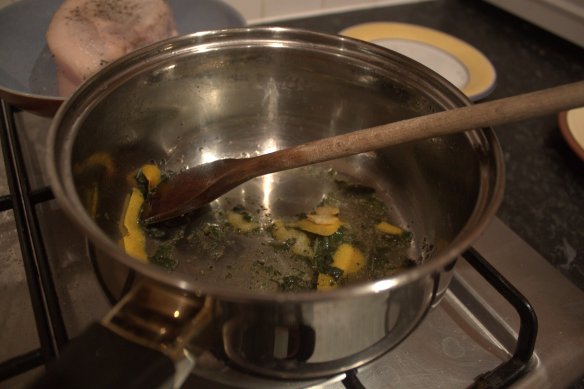 This definitely isn’t the first time I’ve posted a photo of this Hunanese dish. But the reason I post about it, and cook it, so much is because it has got to be one of my all time favourite things to eat. The slow cooking makes the fatty cubes of pork belly wonderfully soft, so that they melt in your mouth. And each cube has soaked up and become swollen with such rich, heady flavours, a potent mixture of sweet wine and soy sauce with hints of the ginger and a slight buzz of chilli. This all sort of seeps out of each piece to delight you when you eat it. The sauce alongside the meat could be bottled up on its own and sold, because scooped onto pearly grains of plain white rice it turns them into something magnificent. But couple these flavours with the textured cubes of meat and you have something truly amazing. I used Fuchsia Dunlop’s recipe to make this dish, and find it works perfectly. Her writing about the origins and story behind it is also well worth reading.

The Japanese are masters at preparing fish. Whether precisely slicing it into sushi and sashimi, or grilling it lightly, they always succeed in bringing out the natural  flavours of the fish so well. Their knowledge of the fish, and the techniques they use to prepare it have been carefully refined over more than a thousand years.Whilst I really like Japanese raw fish dishes, probably my favourite part of the cuisine are the different grilled fish. I remember the first time I had grilled tuna jaw in Hong Kong – breaking through that crisp charred skin with my chopsticks to reveal soft flesh that parted into small pieces when touched. Each piece was spongy and loaded with flavour, bearing a subtle hint of smoke from the grill.

Unfortunately getting Japanese grilled fish in the UK is much harder than getting sushi and ramen, which have spread widely around the world. Because of this, I decided that I would try to cook my own. Searching the shelves of a local Korean store, I picked out some special citrus infused soy-sauce that said it was ideal for dipping fish and meat. I hoped this might make a decent enough version of the sauce usually served with fish in restaurants. 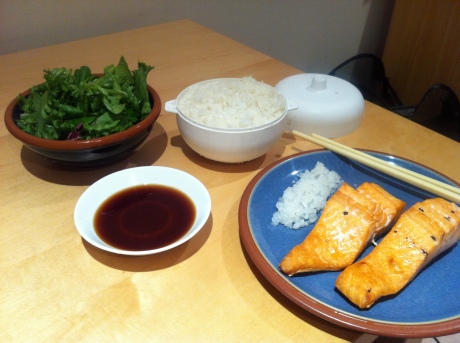 I also picked up a huge white daikon radish from my local Chinese supermarket, chopping it up into tiny pieces. I bought a few chunky pieces of salmon from the local market. To prepare these, I first rubbed salt into them on all sides. Then I put them to soak for five minutes or so in a mixture of salt and boiling water. I was loosely following this recipe.

I used a top down grill. Technically, you’re supposed to grill the fish from below using a special oven but I didn’t have this option. I first placed the fish skin down directly onto the metal bars of the grill tray. I wanted to let the flesh toughen up a bit in cooking before I laid this down, fearing it would break apart and fall through the grill. I left it for about 10 minutes on each side, about 10cm below the hot grill, until the surface of this fish and the skin began to blister a little.

Overall, this seemed to work pretty well. The skin and the upper surface of the fish both had a nice, salty crispness to them, but this wasn’t as good as the smoky charred taste a real grill would give. The salmon flesh didn’t dry out at all and had a good full flavour. It wasn’t quite as succulent as the versions I have had in restaurants, and I wonder if trying recipes which marinade the fish might help with this. Unless somebody wants to tell me of a Japanese restaurant doing great grilled fish in the UK, I shall have to keep experimenting.

Recently I’ve been quite interested in exploring new ways to cook chicken. I like using chicken because its one of the cheapest meats to buy, but it can taste quite bland unless you do something special to give it decent flavour. Along with the garlic chicken recipe I’ve mentioned elsewhere on this blog, this Moroccan Chicken recipe is great for doing that. You start by marinading the chicken for a few hours in orange juice and honey, infusing its meat with a really sweet citrus flavour. Then the chicken is slowly cooked in a broth of saffron, tumeric and other spices, adding an extra layer to its flavour. It comes out a deep yellow colour, absolutely loaded with flavour which seems to ooze out of its soft flesh in each bite. 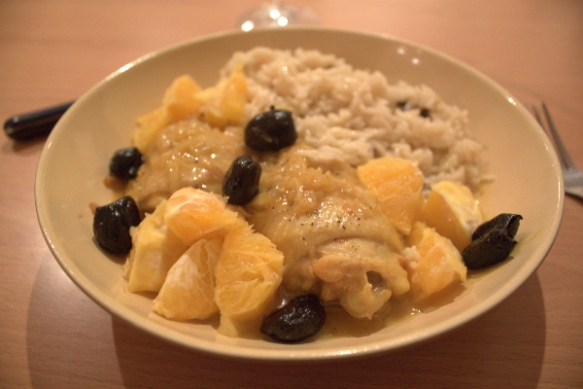 A few weeks ago, my brother had a go at cooking this pheasant curry by Hugh Fearnley Whittingstall. It struck me as a very satistfying dish to make because of the really involved and feeling way you are using the different ingredients. Pheasant is always exciting to use, because you feel aware as you cook with it that somebody has been out, trudging through the fields with a gun in their hand, spotting these birds and shooting them. There is a story behind the sourcing which adds something special to eating it, a feeling of involvment in tradition.

Here extra excitement was added by the need to do our own butcher’s job on the birds and joint them for the dish. This hands on involvement in preparing the meat really helps you to understand its qualities and know what you are using much better. I have no idea how to joint a bird, so I dug out a knife skills books we have where there were lots of finely detailed drawings explaining the different cuts you are supposed to make – something like the instructions to a model. We didn’t quite follow theses, but took the cleaver and using its weight hacked straight down the middle of each bird, splitting it in two. Cleavers really are fantastic implements. Another, more careful cut near the leg, allowed it to be quartered into what looked like quite nice pieces.

Next it was time to mix up the spice base of the curry. These different spices are each a fantastic colour and different smells come of each them as you mix them together. You feel each ones character as you add it into the dish. Mixing them together forms a thick paste, already pungent with the smells of the cooked curry. Into this you add the meat and then mix it by hand in a gloriously sensous part of the recipe. You can feel the supple bird’s flesh and dimpled skin beneath your fingertips, the pasted sliding slickly over it. You breath in the aromas. 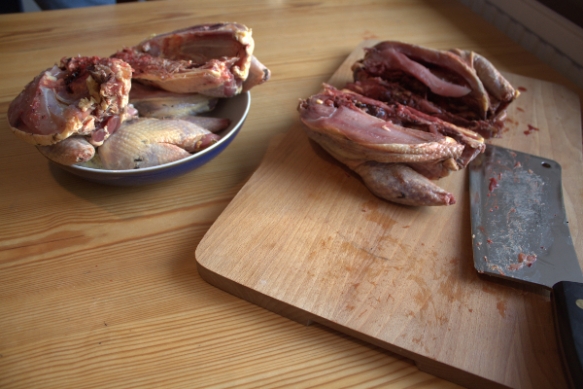 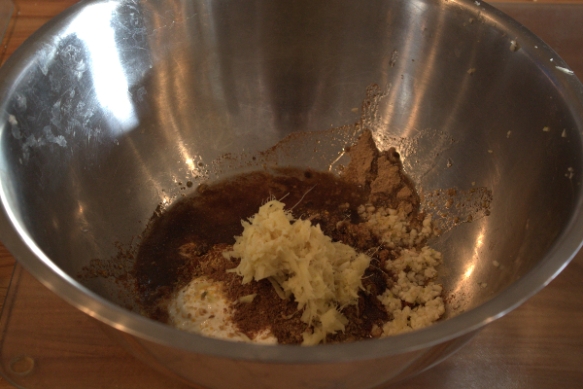